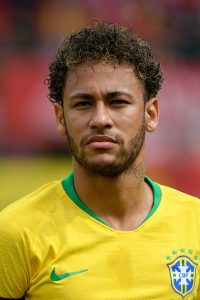 Neymar came into prominence at Santos, where he made his professional debut aged 17. He helped the club win two successive Campeonato Paulista championships, a Copa do Brasil, and the 2011 Copa Libertadores; the latter being Santos’ first since 1963. Neymar was twice named the South American Footballer of the Year, in 2011 and 2012, and soon relocated to Europe to join Barcelona. As part of Barcelona’s attacking trio with Lionel Messi and Luis Suárez, dubbed MSN, he won the continental treble of La Liga, the Copa del Rey, and the UEFA Champions League. He then attained a domestic double in the 2015–16 season. Motivated to be a talisman at club level, Neymar transferred to PSG in 2017 in a move worth €222 million, making him the most expensive player ever. In France, he won four league titles, among other honours, and was voted Ligue 1 Player of the Year in his debut season. Notably, he helped PSG attain a domestic quadruple in the 2019–20 season, and led the club to its first ever Champions League Final.